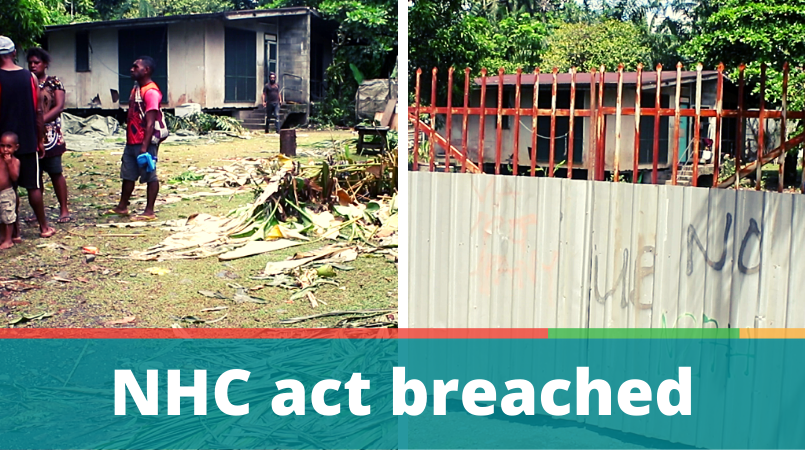 The sale of National Housing Corporation properties to third parties is in breach of the NHC act.

It is no secret that many long-term National Housing Corporation tenants were shocked to find themselves evicted with a new buyer moving in quickly to claim the property.

This is contrary to the National Housing Corporation Act 1990, section 38, subsection 1, which states: “After a tenancy agreement has been in force for two years between the Corporation and a tenant, the Corporation may, in its discretion, offer to–

an option to purchase the dwelling…”

The numerous evictions in Lae in the past month have not followed this legislation, nor the process, as long-time tenants have been forcefully moved from their dwellings, or are threatened to make way for the new owner.

This worrying trend is evident at Cassowary Road’s Cormorant St, Eriku and 12th Street in town.

A property at 12th Street is currently involved in a court battle because the widow and her late husband – both public servants – have been pursuing the NHC to buy the house but instead, faced eviction.

Following the March 23rd Cormorant St eviction, Lae media interviewed regional manager, Andrew Augwi, who admitted that they were not familiar with the legislation.

“I’m not too familiar with section 28 or whatever, but it was a decision made by the management then,” said Augwi. “Whether it was right or wrong, I cannot elaborate. They probably weighed out all circumstances, all options and they made the decision so I can’t say whether it’s wrong or right.”

Meantime, the Special Parliamentary Committee’s intention to look into the property dealings has been applauded by the affected families.

(Left: Evicted tenants in front of the Cormorant St property and right, fencing put around the property to keep the evictees out)