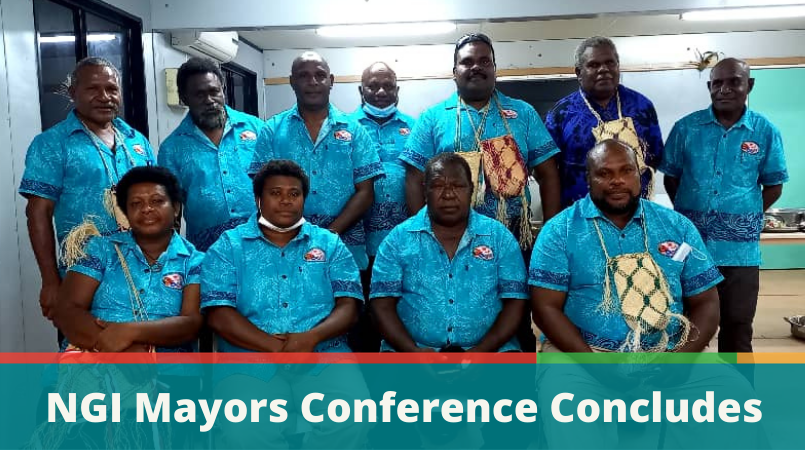 The theme of the weeklong conference was ‘Capacity building for effective and efficient municipal services delivery within NGI region’.

The main message imparted to islands’ leaders was to put together their resources and sharing ideas as a way forward for development in their respective local level governments and towns.

Kokopo Vunamami Urban LLG Lord Mayor, Isidor Bonga said there must be unity shown in the NGI Mayor’s secretariat as this will drive development and economy of the region.

Mayors in the Islands region came together to form the secretariat to ensure common regional issues are discussed and addressed at the national level.

Mr Bonga said the secretariat was an opportunity for all concerned stakeholders to share experiences on how to develop respective towns, in particular efficient municipal services.

Some common issues discussed at this year’s conference include strengthening partnerships and establish dialogue, enforce different taxes for locals and foreigners and conduct educational awareness to business partners on rules and regulations among others.

Mr Bonga said that with Kokopo one of three towns elevated to city status in 2015, they were willing to share ideas with other towns in the region on the way forward in reaching this status.

Board members of the Kokopo City Authority (KCA) Board were sworn in last week. The KCA automatically replaces the Kokopo District Development Authority (DDA) Board, and its Chairman and Open Kokopo MP Emil Tammur, assumes his role as the Chairman of the KCA.

The purpose of establishing the three city authorities of Mt Hagen, Lae and Kokopo, were to provide effective municipal services to its people and to act as economic growth centres for their provinces, region and the country.