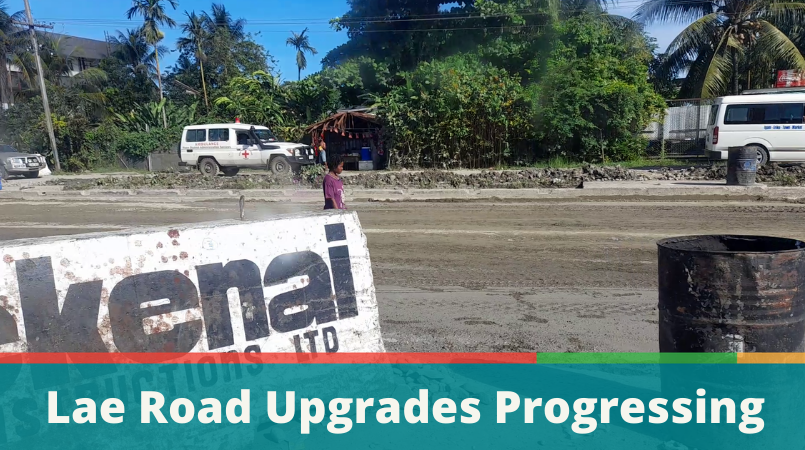 Upgrading works on the Kamkumung and Malahang to Chinatown Road are progressing well despite weeks of continuous bad weather in Lae City.

Lae MP John Rosso has thanked the Provincial Works manager and his team for their commitment and supervision in ensuring the rehabilitation and upgrade of Lae City roads continues.

“Weather has been the main factor affecting work since June this year. We had a bit of opening in October and we hope this good weather continues,” stated Apai.

Dekenai Constructions have already started pouring concrete slabs at Kamkumung while JVPNG started off on Sunday along the Malahang section of the road, targeting ten slabs per day.

“We are working closely with Lae City Authority under the leadership and direction of Hon. John Rosso and I hope we cover maintenance of major road works in the city during this term,” added Apai.

Lae MP, Rosso, thanked the Apa and the engineering team, Works Secretary, contractors and the National Government for their support despite funding constraints.

He said suburban roads in Lae have also been worked on with Phase 1 of the East Taraka main street roads almost completed. Phase 2 will be the upgrade and sealing of smaller street roads in East Taraka.

“The 20 percent GST returns will be tied down to fixing and upgrading our suburban roads in the city like what we have done at Kapiak street, Karoka street, Citos street, Lae Golf Club Road, East Taraka and now the Two-Mile to Three-Mile Road,” stated Rosso, who is also the LCA chairman..

“Eriku, Chinatown, Kamkumung and Tent City Street roads, among many others, are all part of the Lae Suburban Road Upgrade Program of the LCA whilst the major arterial roads in the city come under the jurisdiction and funding of the National Government, through Department of Works.

“Through prudent management of limited government funding and revenue collections, we are able to fix our suburban roads that were neglected and left to deteriorate over the past decades.”

Meantime, Rosso also thanked the Marape government for the commitment towards having the Unitech-Tent City Road completed and the Lae-Nadzab road construction progressing towards Yalu Bridge with additional funding being approved.