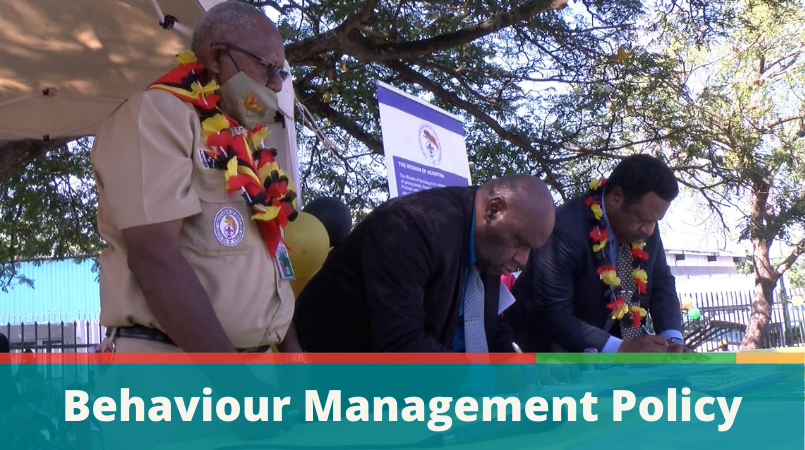 Two important policies were launched today at the Hagara Primary School in Port Moresby. They are the Behaviour Change Policy and the Scouts Policy in Schools.

Minister Uguro said Behaviour Management Policy and Scouts Policy in Schools will be included in the Education Curriculum starting 2022. These policies will help in development of good manners and change of behaviour of students in schools.

“I thank the secretary for the opportunity to launch these two important policies that are intended to help the department to mitigate some of the anti-social and behavioural issues in schools in the national education system.

“Behaviour Management Policy is a whole of school approach to creating the environment that promotes positive behavior and reduces the opportunity for poor behavior in schools,” said Minister Uguro.

Minister Uguro added that the Scout Policy will support the BPMP to achieve the acceptable behavior and enhance the development to manage good manners and build the good characters of young generations.

Dirk Wagener, UN Country Representative in PNG congratulated Minister Uguro, saying both the revision and the dissemination of the Behaviour Management Policy has been supported by the United Nations and the European Union through their joint programme, Spotlight Initiative.

Mr Wagener said, “The Spotlight Initiative is an extremely important program by the United nations, generously supported by the European Union to end violence against women and girls.  This has been a very long journey and I’d like to also specifically acknowledge my good friend (Dr) Claude (Kamenga) the country representative of UNICEF because it is UNICEF which has been leading the UN family here on this journey.”

The spotlight initiative is a multi-year partnership that looks at how we can change social gender norms, attitudes and behaviours both at the national level but also down to communities and individual level. Wagner said the EU has invested about K100million into the whole program.

Wagener said unfortunately in PNG violence against women and girls is very widespread and sometimes people even refer to it as being an epidemic.

He added that women and girls are exposed to violence at their homes, workplaces, communities and sometimes also in schools. And violence comes in many forms.

“We conducted some research in 2019 and this research found that GBV in some schools that only 50% of female students compared to 84% male students feel safe in schools.

“Through this partnership of National Department of Education and UNICEF the Spotlight Initiative has contributed to addressing school related gender based violence through the behavior management policy that’s being launched today,” Wagener said.