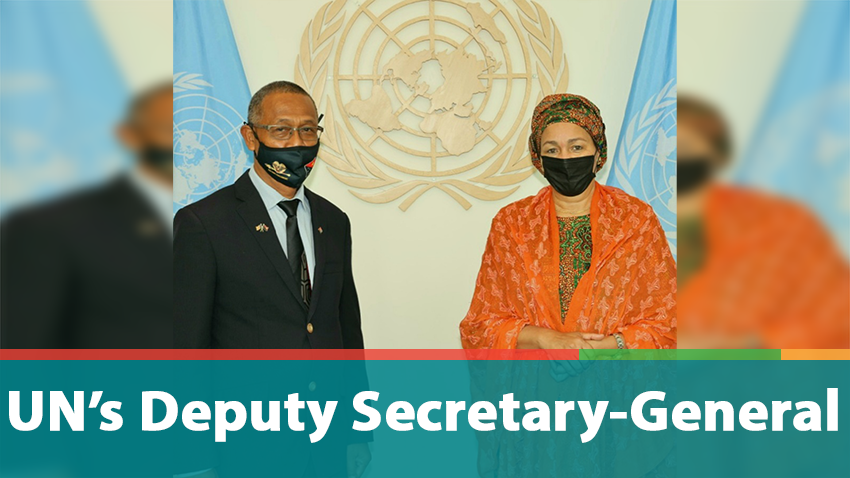 Treasurer Ian Ling-Stuckey held discussions with the second most senior person in the United Nations on Friday, October 15th, in New York.

Ling-Stuckey said he was pleased with the informative and positive discussions held with the United Nation’s Deputy Secretary-General, Amina Mohammed, on integrating the Sustainable Development Goals (SDGs) into PNG’s budget and economic frameworks.

“Her insights as the former Finance Minister for Nigeria, a country of over 200 million people also dealing with major development challenges, were particularly useful,” stated Treasurer Ian Ling-Stuckey.

“I was also pleased to convey the warmest greetings from Prime Minister Marape, who has been developing a productive working relationship with PNG’s international partners, including the United Nations.

“During the discussions, the UN Deputy Secretary-General offered to be involved in even more direct discussions to integrate the SDGs into PNG’s plans for budget repair and reconstruction. She offered to join in a video-conference discussing these plans after further work by the United Nations during the remainder of this year.

“She also generously offered to join in any briefing of new Parliamentarians following the election on the importance of these Sustainable Development Goals, which closely align with PNG’s own priorities.

“PNG is privileged to have such a senior United Nations leader so interested in PNG,” continued the Treasurer.

“She visited PNG last year, travelling outside of Port Moresby and into the Hela Province on an extended visit. During the discussions, she spoke of the importance of recognising the diverse and positive work that is often going on in local and rural areas – there was a need to look at PNG beyond Port Moresby.

“I am confident we can work with the United Nations, and other international partners, to build the Sustainable Development Goals into our plans for recovery and rebuilding from the COVID-19 pandemic.

“As we are seeing from the Delta variant, this is a truly devastating global pandemic. We must deal with the current health crisis, supported by the budget, including the over K500 million allocated for COVID-19 support programs at the local level in agriculture, WaSH and SMEs and other health and security activities.

“We must plan for a new and better future where we grasp the opportunity to do things better and more inclusively in line with the Marape Government’s new development agenda,” stated the Treasurer.