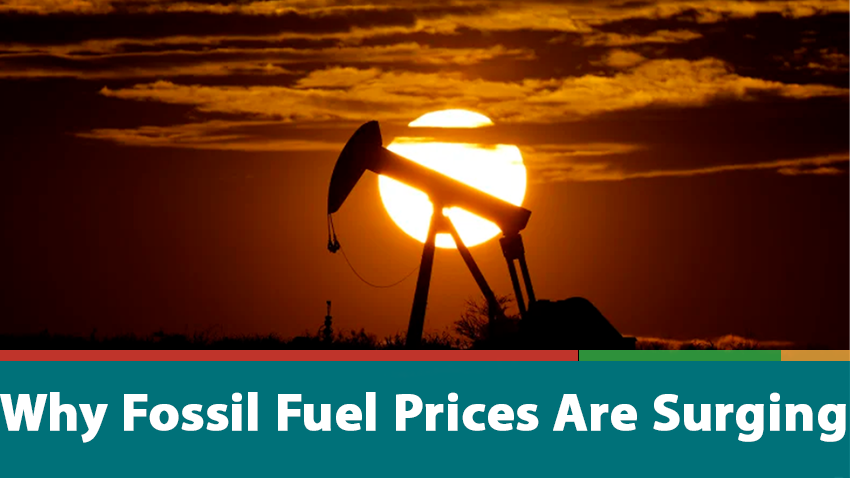 One of the conundrums within the energy crisis that has enveloped the world is why, with the global economy still recovering from the pandemic, it has found itself so short of supply?

The prices of oil, gas and coal have skyrocketed through this year to levels not seen for years and, in coal’s case, ever.

At just above $US83 a barrel, oil prices are their highest since they briefly touched $US84 a barrel in 2018. LNG prices are about 10 times what they were a year ago. Energy coal prices are at record levels.

The energy crunch has, at face value, a simple explanation. There isn’t the supply to match demand.

Within that equation, however, lies a complex mess of inputs that help explain why the energy producers, who were able to more than meet demand pre-pandemic – to the point where OPEC was cutting oil production to balance the market – now can’t keep up with it.

There are cyclical, seasonal and structure strands to the explanation.

The pandemic has played a significant role in the supply shortfalls.

When the global economy plunged into recession last year and demand for fuels suddenly slumped, COVID infections and lockdowns and other infection control responses also impacted the ability of producers to maintain their production, respond to outages, conduct maintenance and repairs and commission new production.

In the US, where for more than a decade its shale oil and gas had been the major influence over global oil and gas market, drilling activity was wound back almost instantly in response to the pandemic and has been much slower to restart.

As a consequence Henry Hub prices – US domestic gas prices – have more than doubled over the past year to their highest levels in a decade.

Inventories of oil and gas were run down during the pandemic and, with a cold northern hemisphere winter last year and a warm summer, haven’t been replenished even as winter looms again.

The impact of the pandemic on global supply chains and transport has been another factor impacting supply.

Russia, whose own inventories were well below previous levels, has prioritised restoring them over supplying Europe with more gas, although it has been indicating that could soon change. There is a suspicion in Europe that the Russians are using the European gas crisis as leverage to gain acceptance for its controversial Nord 2 pipeline.

OPEC, despite urgings from the Biden administration, has decided to only incrementally increase production over the next year and restore only some of the 10 per cent cut that OPEC+ members made to their output at the start of the pandemic.

The pandemic, and weather – the cold northern hemisphere winters, the hurricanes that have shut down oil and gas production in the Gulf of Mexico and impacted onshore oil and gas volumes and the North Sea winds that stopped blowing and consequently reduced renewable generation – are overlays on some structural influences.

The poor returns from oil and gas in the pre-pandemic period after oil prices spiked above $US100 a barrel in 2014 and then crashed as US onshore oil and gas supply rose dramatically provide another part of the explanation for today’s fuel shortages. Low returns mean less investment in a sector that devours capital.

The main longer-term influence, however, is the global push to reduce carbon emissions. That has driven some displacement of fossil fuels by renewables but, more particularly, it has had a significant impact on investment in the sector.

Big oil and gas companies have been under extreme pressure from some governments, their shareholders and environmental activists to reduce their production of oil and gas and are succumbing to that pressure. New projects or expansions are becoming ever harder to finance as investors and banks have withdrawn access to capital.

What we’re seeing today might be by exaggerated by pandemic-related influences but in some respects it is a foretaste of what’s to come in a future where the energy sources may be somewhat less reliable and abundant.

As the big companies scale down their involvement they are being displaced to some extent by smaller opportunistic companies and private equity firms. Those players are more focused on milking existing production and maximising returns on their investments than investing significantly in growing volumes.

China’s rapid bounceback from the worst impacts of the pandemic coincided with a commitment from Xi Jinping to reduce the energy intensity of the economy by three per cent this year, reach peak emissions in 2030 and achieve net zero emissions by 2060.

That implied a major reduction in its dependence on coal – coal accounts for about two-thirds of its power generation -- which led to Beijing ordering coal mines to close and power plants to use less coal.

The unexpected strength of its recovery and the extraordinary global increase in demand for consumer goods, however, caught it by surprise.

China is now scrambling to secure oil, gas and coal and re-opening coal mines to keep its factories open and homes warm as it heads towards winter. Its sudden increase in demand for energy has been the main factor driving the surges in global LNG and coal prices.

In the near term there will be a supply-side response.

US onshore activity is starting to ramp up, OPEC has the capacity to increased production materially (although its members have divided views on the trade-offs of volume and price) and Russia can significantly increase its supply of gas into Europe.

Longer term, however, the impact of the global drive to reduce carbon emissions and the effects that will have on new production in sectors that require continual new investment to replace depleting reserves will ensure that the supply-side response to increased demand for energy should remain constrained.

That will make investment in renewables and energy sources like hydrogen in its various forms more competitive but it also implies that energy costs – and the prices of the stagnant or declining volumes of fossil fuels over the next decade or two – should remain elevated.

What we’re seeing today might be exaggerated by pandemic-related influences but in some respects it is a foretaste of what’s to come in a future where the energy sources may be somewhat less reliable and abundant.